Destiny 2’s springtime celebration, the Revelry, is in full swing. Players have had a couple of days now to get a taste of all that the event has to offer, so let’s dive in and take a look.

The Revelry runs from April 16th to May 6th and is the Destiny Universe’s answer to festivals such as Easter, Holi, and Hanami. It’s a vivid and vibrant celebration of the rebirth and new life associated with Spring. As with most of Destiny’s seasonal events the Tower has been decorated to suit the occasion – lush green foliage and blossoming trees dominate the environment. It’s an impressive sight, as it needed to be after this year’s Crimson Days.

Double Bright Engrams are also back for max level characters. For the duration of this year’s Revelry, every time you obtain a Notorious Engram you will also be awarded a Jubilant Engram alongside it. What’s more the loot pool for Jubilant Engrams contains what Bungie is calling a “knock-out list”, which should prevent players obtaining duplicate items from these Engrams until they have exhausted the loot pool.

The heart of the Revelry celebration is its activity: the Verdant Forest. After 2018’s generally well-received Haunted Forest, (the activity from last year’s Festival of the Lost Halloween event) Bungie have taken another stab at the idea. Participating in the activity will award players the opportunity to earn a shiny new set of armour – the Inaugural Revelry set, as well as other loot such as Enhancement Cores and a brand new Exotic weapon. The Verdant Forest can be tackled solo or as part of a pre-made or match-made Fireteam. And like the Haunted Forest, the Verdant Forest will task players with clearing as many Branches as possible within the time limit. However this time around the activity has two phases:

The first phase has players racing against the clock clearing Branches, every enemy slain and Branch cleared will extend the activity’s duration – as will locating hidden loot chests and resetting the simulation by standing on Vex plates. All of this hustle pays off in the activity’s second phase – a good old fashioned boss rush. The number of Branches and resets your Fireteam has under its belt directly affects the time limit you have during the second phase. Defeating all five of the Verdant Forest’s unique boss enemies will award you with five loot chests and grants players a higher chance of obtaining an Inaugural Revelry armour piece for their troubles. But don’t worry, even if you can’t take down all five bosses you won’t leave empty handed.

In addition to the Inaugural Revelry armour there is a second set that can be acquired through Eververse called the Vernal Growth set. You can pick up pieces of this armour directly from Tess Everis’s weekly inventory or in random drops from Jubilant Engrams. In addition to this armour set, Tess has a variety of cosmetic items on sale too. The usual array of Ships, Sparrows, Ghost shells, Projections, Emotes, and Shaders are on offer. There are also a couple of premium bundles available for direct purchase with Silver. One that contains a new Ornament for the Jade Rabbit Exotic scout rifle, and another that contains the adorable Cotton Tail Exotic Ghost shell. 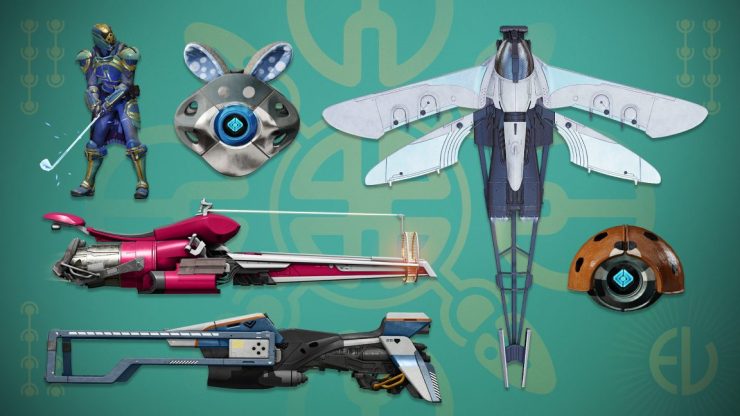 You can start the Revelry by speaking to Eva Lavante in the Tower, she’s in her usual spot in the Bazaar. Eva will give you a Reveller’s Tonic to help get you in the festive spirit and 50 Reveller’s Essence – the event’s currency. Drinking the Reveller’s Tonic will give players a buff to their Class, Grenade, or Melee Abilities. The catch? It costs exactly 50 Reveller’s Essence to fill the bottle and apply the buff. Once you spend your first 50 Essence you’ll be prompted to pick up a bounty and go speak to Tess Everis, who wants you to scout out the Verdant Forest for her.

Upon completing your first excursion into the Verdant Forest Tess will give you a little something for your efforts and you will now have access to all of Eva’s daily and weekly Revelry bounties. Completing these bounties and runs of the Verdant Forest will net you more of that sweet, sweet Reveller’s Essence – which you can then spend on gift packages from Eva containing special Ornaments for the Inaugural Revelry helmet, more swigs of Reveller’s Tonic, or the coveted Arbalest.

The Arbalest is a new Exotic Linear Fusion Rifle specific to the Revelry event. The Arbalest is unique in that it is the only kinetic linear fusion rifle in the game, meaning that it fires slugs like a railgun. Think Skyburner’s Oath’s big brother and you’ll have some idea of how it works.

Earning the Arbalest is no mean feat however. Not only does it cost 300 Reveller’s Essence, but only players who have completed the Party Hard Triumph are deemed worthy to buy it. In order to fulfil the requirements of the Party Hard Triumph players will have to complete no less than seven other Revelry-related Triumphs. None of these Triumphs are particularly difficult, but it will take a fair amount of grinding to complete them all.

In other news, it’s worth mentioning for those of you still unaware that Bungie also recently dropped Update 2.2.1, which made some important changes to all Arc Subclasses and tweaked the new Gambit Prime/Reckoning game modes. In addition these changes the update also increased the drop rate of Last Wish raid gear (including the One Thousand Voices raid Exotic) and the Dreaming City’s cosmetic items, as well as the drop rate for Lore Book entries. The update also introduced four new Exotic weapon Catalysts into the game. Players can now grind for the Rat King, Hard Light, Prospector, and Suros Regime Exotic Catalysts in Strikes, Nightfalls, and the Crucible.

The Revelry is underway right now, so if you’ve not had the chance yet or have been taking a break away from Destiny – now is an excellent time to jump back in and experience it for yourselves.